The main research question concerns the promotion of an integrated and adaptive water resources management approach, which explicitly addresses the WEF nexus and aims at promoting a sustainable economy in regions where new infrastructures and expanding agriculture have to be balanced with the local social, economic, and environmental dimensions. We hypothesize that establishing a DAF based on the Participatory and Integrated Planning (PIP) procedure allows the evaluation of the WEF nexus with the necessary perspective to investigate the impacts of infrastructural developments on the social, economic, and ecological dimensions of the river basins, and to assess ex-ante the alternative decision pathways based on such an investigation. Two case studies will be used to test our hypothesis. Particular attention will be given to the effect of foreign direct investment in these regions, which could potentially have a huge impact on the availability of water and food for the local population, thus hampering development.

A decision-analytic framework, based on the PIP procedure concept and a model-based procedural structure supported by an advanced multisource monitoring network, will be used to explore the WEF nexus by running an extensive scenario analysis, in order to identify alternative decision pathways. It will consist of a mathematical quantitative tool of both descriptive and prescriptive nature, which allows for the identification of feedback mechanisms among the WEF components. The WEF nexus will be quantified and analysed as the trade-off between conflicting objectives such as hydropower production vs. irrigation, irrigation vs. environmental flows, land exploitation vs conservation, etc. across the riparian states. Given the presence of economic objectives, the nexus will also be translated in economic values that also take into consideration ecosystem services. 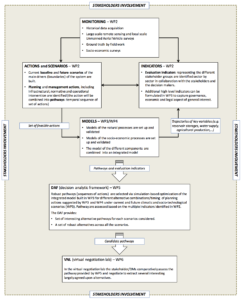